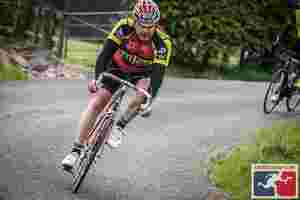 We caught up with Laurence Morgan, founder of TI Raleigh Vintage Cycling Club to discuss everything about the iconic bike.

It’s been forty years since team TI-Raleigh-Creda won the Tour de France on the iconic TI-Raleigh. As we celebrate this momentous victory by launching a new TI-Raleigh, we caught up with Laurence Morgan, founder of TI Raleigh Vintage Cycling Club to chat about his passion for the iconic bike, getting to know team TI and reliving the good old days!

Could you tell us a little about setting up the TI cycling group?

Laurence: It all came about in late 2014 when I bought a 753 Ti frame from eBay. I had just finished a tour of Afghanistan and finished with the Air Force so was looking for something else to do.

I started to build up the 753 Ti frame and at the same time signed up to ride John o’ Groats to Land’s End for spinal research. It was at this point that I decided to get a bike fit done and called an old racing buddy who had a business doing so. We started talking about old times and I said I was thinking about starting a vintage cycling club up here in Scotland, he thought that was a great idea.

Upon suggesting that I’d like the group to be called the TI Raleigh Vintage Cycling Club GB, my buddy advised he’d had dealings with Raleigh in the past and had a few contacts. I asked Raleigh’s marketing team if they’d be happy for us to use their team colours for our club kit, they said ‘no problem’. In fact, after a couple of emails back and forth, they offered for us to use the Ti logo too.

Next up was to get a design of our club kit drawn up. We used the team colours, as discussed, with a slightly different design. Our kit was ready and on 15th November 2015, the club was born.

In setting up the club, what did you aim to achieve?

Laurence: The club has achieved its initial goal in that it has facilitated the bringing together of a great bunch of guys who have a shared passion for cycling vintage bikes, especially the TI-Raleigh.

We’re all about reliving, and recreating memories of our youth. I can remember seeing my first TI-Raleigh bike at the end of the Scottish health race, way back in 81 or 82. It was leaning up against a van, I couldn't take my eyes of it. It was the best-looking bike I’d ever seen and from that day, like many others, I was hooked.

Every Saturday morning, I would go into Halfords in Perth and look at the Ti clothing and the Raleigh Europa bike on the stand. I remember telling myself I was going to get one, one day. Well that didn't happen until I turned 40, when an old friend gave me his frame for my 40th birthday. I was absolutely blown away by this, my first TI-Raleigh road frame.

Laurence: Not only has the club brought us Ti fans together, we mere mortals have been joined by Ti Raleigh pros! The first to join us on a club ride was Aad Van Den Hoak from the Netherlands. I had bought a couple of shirts from eBay and wondered if I could get them signed by a pro rider. I found Aad’s profile on Facebook and asked if he would mind signing my jerseys, he happily agreed to help, and was really interested in hearing more about the club.

Following this, I asked Aad if he’d like to become our overseas patron. He again was totally up for it. To say I was excited to have our first pro member would be an understatement! Since then, Aad told his mates about what I was doing and the ball has not stopped rolling. I still have a couple of pros to capture yet, but give me time!

So, do members get to chat and meet with the pros through the club?

Laurence: All the members are in touch with the pros from time to time. Hearing stories, swapping bits and pieces, helping each other with kit and memorabilia, it all makes us happy on both sides. It’s fantastic how we all have the same passion for the past and reliving it again

I remember the first time the club met the pros. The thought of going out for a bike ride with the best cycling team in the 70s and the 80s, world champions, national champions… Well, I'm sure you can imagine, we were all dumbfounded.

I took, I think, four TI Raleigh bikes over to Holland the first time we went in 2017. I couldn't believe that the TI pros were using my bikes. I had a huge smile on my face, as did they - they probably hadn’t ridden a TI in 30 years.

Where are your members based?

Laurence: Our members are based all over the world from as far as California and even Austrlia. The majority though are here in the UK, particularly Nottinghamshire. We’ve pros from the Netherlands, Corsica and Germany. The distance means nothing really, we still keep in contact once or twice a month. Facebook is a great tool to get photos and updates from the pros at special events that we can’t get to so it’s great they can keep us in the loop and vice versa.

We know you’re a bit of a collector, which Raleigh bikes do you currently own?

Laurence: I have 16 Raleigh bikes in total:

I think my favourites must be my tour bikes with their battle scars. Seeing them being used in the TDF and knowing I have that exact bike is a joy.

You’ve got some great memorabilia too. What’s your favourite piece?

Laurence: I have several pieces of Ti kit, but the most precious must be the yellow jersey from Joop Zoetemelk. He gave it to the mechanic who built his bike for the 1980 tour. I got it couple of years back.

I also own Eric Vanderaerden’s 1985 podium yellow jersey as well as a few from World Champion, Gerrie Knetemann.

And finally, what do you think about the new 40th Anniversary TI-Raleigh?

Laurence: This is huge in the steel bike world. There are a lot of people out there wanting a piece of history and I think this new bike has this. I think fans will understand that you can’t get period-correct new Campagnolo for this, but you have come very close to what it needs. I suspect that the frames you sell will be built up in Campag Super Record, that’s what I’ll do when (and if) I get a frame.

Interested in the TI Raleigh 40th Anniversary Edition? Join us for our online launch event for exclusive early access and to be among the first in the world to get the opportunity to purchase this iconic piece of history.