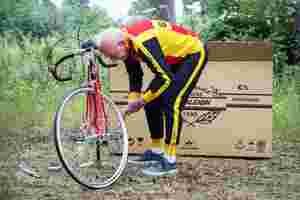 The making of the
Raleigh TI
40th Anniversary Bike

To celebrate the 40th Anniversary of Zoetemelk’s TI Raleigh victory we have created a limited edition run of bikes, just 250 complete bikes and framesets will be available. Here we explain exactly how this iconic bike has been re-created.

Throughout cycling history Raleigh road racing teams have ridden under many guises & the TI team kit & bike colours are undoubtably one of the most iconic in cycling history.

During the 1970’s & 80’s the team took many racing titles, with Dutch team rider Joop Zoetemelk in 1980 taking the yellow jersey & win at the Tour De France.

To celebrate the 40th Anniversary of Zoetemelk’s TI Raleigh victory we have created a limited edition run of bikes, just 250 complete bikes and framesets will be available. 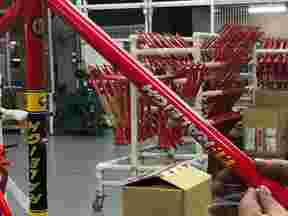 Step One: It’s All in the Design

In the 1970’s Raleigh & tubing manufacturer Reynolds were both part of the Tube Investments group, hence the TI reference. To replicate the bike correctly we reached out to Reynolds to discuss the possibility of reproducing the legendary 753 tubing which was used on the team framesets. After much discussion & liaising with their material suppliers, Reynolds confirmed they could make a limited run of 753 tube sets for the project.

The frame geometry for this project was our next challenge, but fortunately the original measurements for many famous cyclists for who had ridden a Raleigh SDBU frameset, were still in the archives. Many of whom were measured by the legendary Gerald O’Donovan.

In these files were Joop Zoetemelk’s 56cm frame measurements, so as a central size we entered these in to Solidworks & upsized/downsized accordingly. 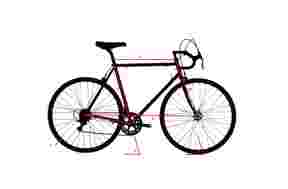 In the 1970’s the testing of the team frames was done in competition by the riders, but fast forward 40years and all bicycles must be tested and conform to EN-ISO test standards. Virtual testing is carried out using FEA (finite element analysis). Various forces are applied to the model in different areas to ensure the frame can withstand real world use.

Once the physical samples have been produced, the forces are verified with physical testing to international EN ISO safety standards.

From the start it was decided the bike needed to be specified as closely to an original bike as possible, of course sourcing 200 new classic Campagnolo Super Record group sets would be impossible to do, so we had to use components available today.

Drivetrain: Campagnolo, or ”Campag” as it’s also known, were a main TI team sponsor at the time of victory, but todays Record group set is made mostly of Carbonfibre & would look out of place on the TI.

Similar to Reynolds, there were many discussions and it was agreed that Campagnolo would make a limited run of Veloce silver alloy derailleurs branded with Campagnolo logo’s instead of the normal Veloce. We also specified a Campagnolo Veloce Chain & 10speed 13-29t cassette to match.

Keeping the look period correct, a chain set similar looking to what would have been used by Joop was sourced, along with CNC machined 50/39T alloy chainrings for added precision.

We wanted to keep the bottom bracket as close as possible as the original and avoid a cassette type. Luckily the Japanese maker, Tange, produce a high precision classic cup/axle bottom bracket.

Steering: When building a modern-day classic racing bike, the Italian Cinelli “64 Giro d'Italia” is really the only choice of handlebars, matched to their classic “1A” stem finished in mythical Milky anodised silver. The handle bar tape choice is from Velox in France.

Braking: This area was of much contention, the bike had to have classic exposed brake cables & tan lever hoods, these are no longer produced by Campag, so we reached out to Dia-Compe who still make such classic looking brake levers. For the calliper, we were able to specify Campagnolo Centaur dual pivot brakes which provide modern day stopping power.

Wheels: For the wheels the choice was simple, Mavic had to be the rim supplier & we chose their “Open Pro C” model, Mavic also agreed to reproduce their classic rectangular rim decal for the bike, adding further to its classic period styling. The rims have been laced using stainless steel spokes in custom CNC made “Sheriff Star” hubs featuring sealed cartridge bearings for long life smooth running. 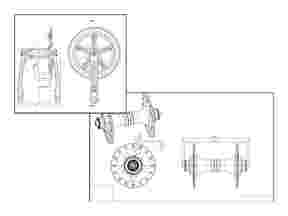 For Reynolds to supply a frame builder with 753 tube sets they have to have been accredited by Reynolds, proving that they are skilled enough to braze this material. Not just any frame builder can build such a magnificent frame/fork.

With the original SBDU workshops in Ilkeston & Worksop now a distant memory, and the timeline of making the frame in the UK prohibitive, we looked overseas to Taiwan where Reynolds has several accredited frame builders.

Many of the team working on this project at Reynolds have been working at the company since the early 70’s, so there is a possibility that they also constructed tube sets for the original TI framesets.

With the 753 frame tube sets made in Birmingham, we shipped these to Taiwan for brazing in to what would be the Ti Frameset. 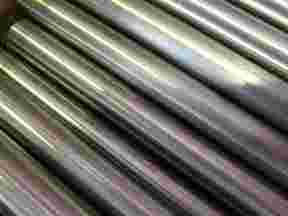 Head tube fitted with lugs ready for brazing to the top tube/down tube in the jig. 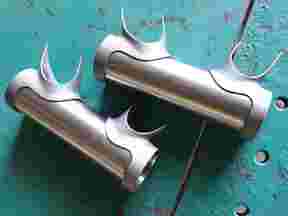 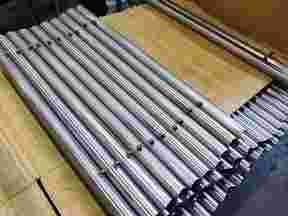 Before brazing, every frame/fork is checked against a 1:1 scale technical drawing to ensure everything is cut to size & correct to the design. 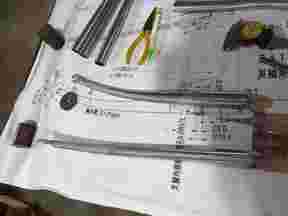 Fork crowns with the steerer tube brazed in place, ready for the blades to be fitted and brazed. 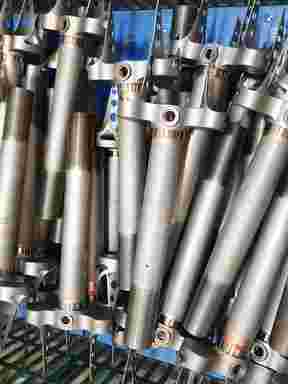 After leaving the frame building workshop the frames and forks are then chemically cleaned to remove all grease & dirt to endure the highest level of finished is achieved. 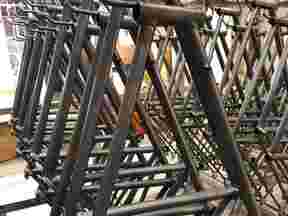 Passing through the paint shop robot, from where they move on to be hand finished 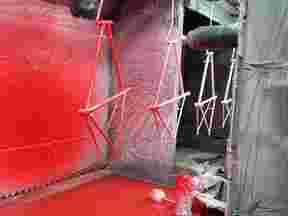 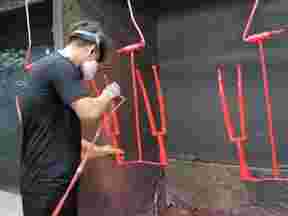 Water slide decals are then applied by hand before going back through the paint shop for the final two coats of clear lacquer.

Once the final clear lacquer has been oven hardened, the frames are ready for assembly. 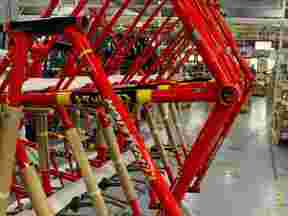 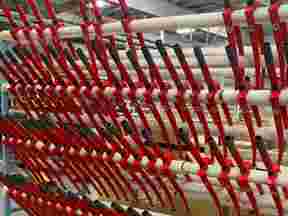 After leaving the paint shop the frames are transferred to the assembly line where they are carefully hand assembled.

The down tube gear shifters are true to the original style and are a friction shift type.

The chain set being hand torqued to 45Nm. 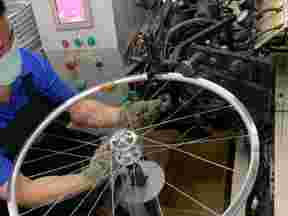 After the wheels have been built, the tyres are then fitted, inflated and left to sit for several hours before then being hand checked for trueness. 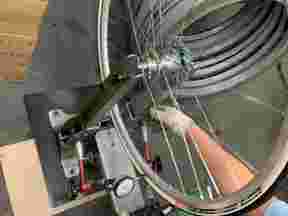 The rear wheel is assembled and the derailleur are set up. 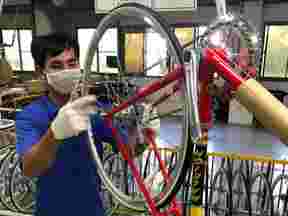 All frames have been stamped on the bottom bracket shell with their own unique Ti40 Serial number and are accompanied by a certificate of authenticity stating the serial number. Each certificate has been personally signed by Joop Zoetemelk. 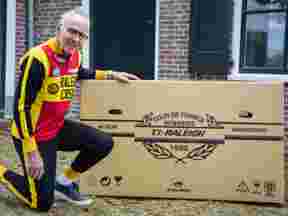 We hope you’ve enjoyed this glimpse in to the remaking of TI Raleigh 40th anniversary bike, we’ve certainly enjoyed the challenge and opportunity to once again work alongside some of the great brands in the cycling history to recreate this iconic bike.