“Oh God, I can’t look. Woody Harrelson is barrelling down a steep, gravel-covered bridge on a Raleigh Chopper. He’s daringly balanced himself, one-footed, on the bike’s frame, and his wincing publicist is averting her gaze and praying that he doesn’t horribly brain himself on her watch. Christ, he is totally gonna come off…” – JOE MADDEN, Shortlist Magazine

Back in June the team at Raleigh were asked if we might be able to loan a Raleigh Chopper to Shortlist Magazine for an upcoming photo shoot featuring Hollywood star Woody Harrelson. Naturally we were happy to help; in fact to say we were excited would be an understatement! Our Marketing Manager spent the remainder of the afternoon trying to invent excuses to deliver the bike in person just to get the opportunity to meet Woody, because after all “…he’s a total LEDGE!” Can you tell she’s a fan!?

Woody is famed for his roles in many a Hollywood blockbuster including Zombieland, The Hunger Games trilogy, Now You See Me and most recently for the critically acclaimed War for the Planet of the Apes. The interview loosely centres on this, most recent release from 20th Century Fox. The film premiered on 14th July 2017 and co-stars Andy Serkis and Steve Zahn. Interview topics touch on everything from President Trump to Global Warming, Veganism to Apocalyptic Viruses as well as highlighting a few film roles that Harrelson kicks himself for missing out on throughout his career.

It’s nice to see the personal touch and insight gained by writer Joe Madden for Shortlist which perfectly captures the wry, quirky and downright eccentric elements of both Woody’s personality and the interview itself. It’s rather endearing really!

“But Woody can’t help himself. He’s pathologically open, and it’s hard to imagine him pulling off frosty, enigmatic opaqueness. “Look,” he shrugs, “you wanna know the personal stuff? I’m a simple guy and I’m a hippy and I live in Hawaii and I’m an anarchist and I like to wear no shoes. And that’s, like, basically it.” Mile-wide grin.” – JOE MADDEN, Shortlist Magazine

In true Woody style we’ve even managed to get a bare-foot snap of him riding our bestselling Raleigh Molli girls bike in gorgeous pink and purple complete with colour matched streamers. Parents… DO NOT TRY THIS AT HOME!

It has been a delight for the Raleigh team to be a part of making this frankly eccentric photo shoot possible and fantastic to see the final, slipper-clad result. Our thanks to the team at Shortlist Magazine and Woody Harrelson for selecting the Chopper!

Read the full article entitled ‘Riding Choppers and talking about the apocalypse with Woody Harrelson’ on the Shortlist Magazine website. 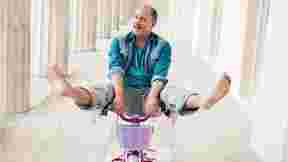