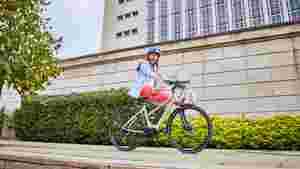 Ever wondered what a hub motor is or where the term Pedelec comes from? We've created a handy guide to explain common electric bike jargon that you might come across and help you explore electric bikes with more confidence.

The motor system is what gives an electric bike its power. Motor systems can be front-wheel, rear-wheel or mid-mount systems that all have their advantages for riders. For more information on the motor systems within our range click here.

When the motor is located in the front or rear hub on the electric bike.

A unit of electrical currents.

When the battery used to power the electric bike is fully hidden (integrated) within the frame.

When the battery used to power the electric bike is partly hidden (integrated) within the frame.

Pedelec is a term that is used when an electric bike requires the rider to pedal before the motor will run. This term is a shortened combination of the words "Pedal Electric".

TransX are an electric bike motor system manufacturer that provide the motor, display, and components for bikes within of our electric bike range.

The display is attached to the handlebars of the bike and shows you useful information about your electric bike while it is being used. In most cases, this is also where you control the power assistance when riding.

Provides you assistance when pushing your bike up to 6mph, to make it easier to push your bike when it is not in use.

A term used to describe the different power assistance levels provided by the electric bike system.

The torque (or power) output of the motor.

The force that causes rotation within the bike.

A created Bosch motor system that powers the bike.

An onboard computer system that is attached to the handlebars of the bike. The Purion shows the display and provides the assistance required when riding.

Powerpack can be another term for battery when talking about electric bikes.